Virtual reality is becoming more accessible to more people. When people first started developing it back in the 60s, systems were enormous, clunky, uncomfortable, and didn’t do anything particularly impressive. On top of all that, the technology was just too expensive to make it available to a wider audience.

So virtual reality sadly had to remain a futuristic dream. But now, we are lucky enough to be living in a time when the technology has finally caught up with the vision developers have had for decades—a fully immersive virtual reality system that was comfortable to wear and affordable enough for the consumer market.

Now, there are multiple products on the market for you to choose from so not only is virtual reality a real possibility, you’ve also got different options to choose from! One of the best high end models you can get is the HTC Vive. Learn more about it below.

This is a high end system so it’s not enough to just get the headset alone as you might with some of the lower end models. Fortunately, the price of the HTC Vive includes a complete bundle with everything you need. When you buy it, you will get:

You also have the option of buying a bundle that also includes a high powered gaming PC (complete with tower, keyboard, and mouse). This isn’t necessary if you’ve already got a computer that meets at least the minimum spec requirements but it does make sure you are getting the ultimate experience.

Although, if you want to, you can just find a computer with similar specs as the one that is included in the gaming desktop bundle that Vive offers. So it is a nice convenient option to have but you are definitely not at all required to go for that. You can get the VR bundle to use with your own PC.

The Vive uses the absolute best technology available. The display uses 2 separate high definition screens and you’ve got adjustable lenses so that you can position them to perfectly match the distance between your eyes (which differs slightly from person to person).

There is one really cool feature called the chaperone that we can’t help mentioning. One of the potential issues with virtual reality is the device completely cuts you off from the actual real world around you. So as you’re dodging attacks in a game, you might end up running into your couch or tripping over a coffee table.

The Vive headset includes this safety “chaperone” system which places boundaries on the area of play. Just clear the furniture from with the safety area and your headset will warn you when you are stepping out of bounds. It also has a front-facing camera that will let you view the real world when you need to. And you can get phone notifications displayed for you while in the virtual world. 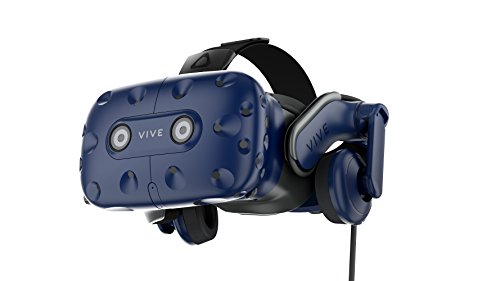 Because HTC partnered with Valve Corporation to create this headset, it already has more than 500 games available that you can play with your new VR headset.

With multiple sensors in the room, you are able to stand up and move around while using your virtual reality headset. This is something pretty unique to the Vive. Its leading competitor, the Rift, only has the one sensor that you mount in front of you. That allows you to stand or sit but not really move around.

This headset is easy to wear because of its ergonomic design and the padding (and even an alternative face cushion so you can choose the more comfortable option). It’s also pretty lightweight although just slightly heavier than the Rift (but the weight difference is not enough to really be noticeable).

So, overall, this is a comprehensive high end virtual reality system that will allow you to become fully immersed in the virtual world. They are also adding new features all the time like virtual reality movies and other apps. It’s not cheap but they definitely make sure they are giving you as much bang for your buck as possible so you won’t feel like you got ripped off.

The HTC Vive is pretty much the most expensive virtual reality system that you can buy. Of course, it’s also the most complete. But with any product at this price level, you need to be prepared to commit to the investment. We definitely recommend testing out to see if it is something you really will get a lot of use and enjoyment out of before you commit to owning one.

The bundle comes with earbuds but, for one, earbuds don’t allow for as rich of audio as you might want. The over the ear headphones that come with the Rift are better and have 3D audio capability

Since you are able to stand up and move around, you may need to rearrange furniture or clear out some space in your house where you can safely move. If you live in close quarters, that might not be an option which means you are paying more for something that you won’t be able to really use to its full extent.

Using it while sitting down is still tons of fun but it’s nice to have the option to get up and move around. Otherwise, you might as well go with the Rift which offers the same quality at a cheaper price.

Even for a high end system, the Vive requires more set up than its competitors. You’ve got to mount the base stations (sensors) in your room and then connect everything with your PC. It’s nothing especially difficult but it is a bit time consuming.

There are definitely a lot of games but they don’t offer the rich storylines and gameplay that you see with the titles for the Oculus Rift. Whether or not that is a real drawback for you depends on your personal taste in games.

If you’re familiar with the Steam selection and you would be satisfied playing exclusively those games, this will be no problem for you. If you want games with a little more meat to them, you’ll need to consider your options a little more before you purchase.

Basically, it is an amazing machine if you are ready to spend the money on it. But if price is a limiting factor for you, you’d be better off checking out some of the lower end models—and not even testing the Vive because once you see the level of quality that this has, you’ll have a tough time appreciating any of the machines with lower quality tech.

Right now, this is definitely the most comprehensive VR system you can buy. It’s got the same level of quality when it comes to technology as its competitor and it already comes with handheld motion controllers so if you’re not willing to wait for the Rift to release its motion controllers, you don’t have to! 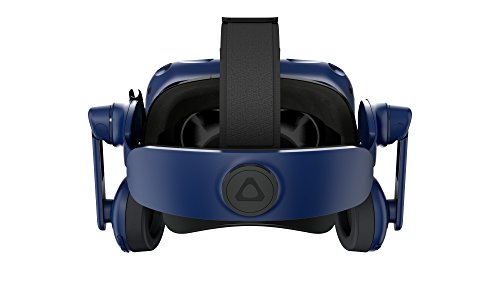 The price is a serious factor, though. This is pretty much the most expensive system you can buy. You are getting an exceptional level of quality for that price but you definitely need to make sure that you are ready to commit to the investment. We suggest going to a store or to a friend who has it and trying it out.

We would also recommend trying out some of the cheaper models as well. If anything, doing that will let you get a clearer sense of just how much of a difference in quality there is which might make it a little easier to understand why it costs as much as it does.