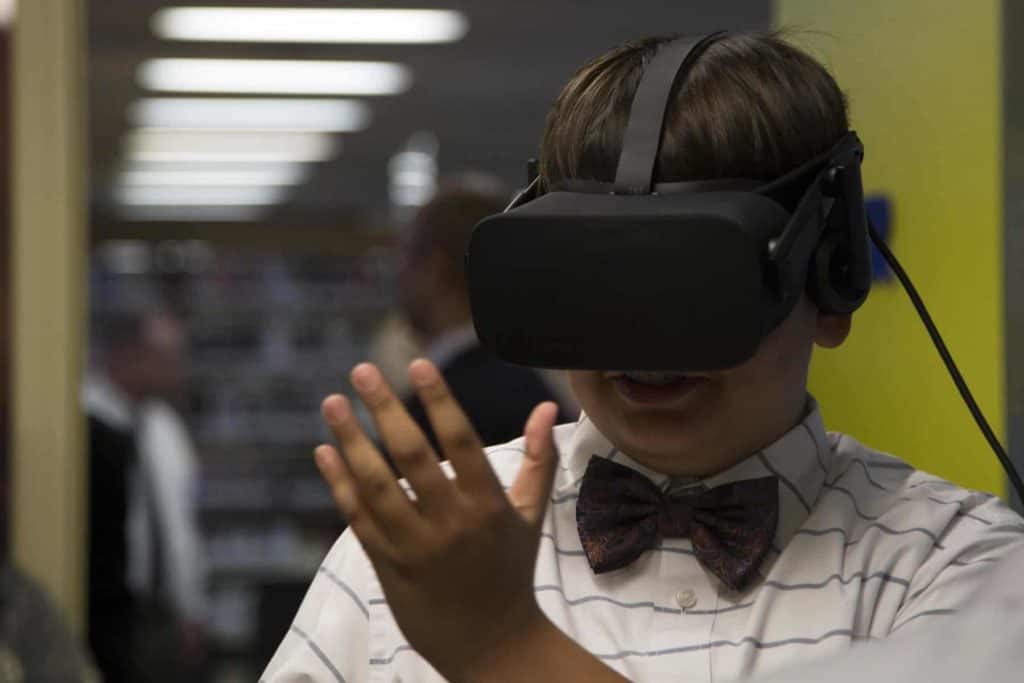 Virtual reality experiences have existed—at least in name—for many centuries, reaching back before the advent of photography. Arguably, the first example of adult-themed virtual reality content was in the form of what used to be called a “peep box” or “perspective show.” These early forms of adult-themed virtual reality used a wooden box to contain an image of sexually-explicit material, which the viewer would pay to take a peek through a small hole on the front of the unit. Eventually, multiple photographs or explicit animation was designed to act as a moving slideshow, effectively becoming a raunchy flick of just a few frames. Today, ﻿virtual reality﻿ and VR gaming technology are actively being developed to live up to its name. Virtual reality gear, such as Oculus Rift, PlayStation VR, and HTC Vive have brought VR into multiple industrial uses for things like architecture, engineering, and design. But the real fun is still in the commercial video game sector. And, for those looking for the VR peep shows, there are five ﻿﻿virtual ﻿﻿reality games for adults that you should keep an eye on. Probably the purest form of an adult VR experience, AliceX is the best adult virtual reality game for those looking for real-time fun with real people. AliceX is an online browser service, which aims to connect a real-life model with a user who is seeking VR companionship. The service is available for anyone with a smartphone, smart TV, tablet, or computer. However, the best experience is had from using a VR headset.

Users can pick a temporary “girlfriend,” whom will keep a user company for a predetermined amount of time. It is, for all intents and purposes, a 24-hour live cam-girl website, with an added capability of being compatible with virtual reality headsets, like Google Cardboard, HTC Vive, and Oculus Rift. However, AliceX brings a completely new meaning to the concept of digital intimacy. AliceX is not for the faint of heart and will definitely leave you sweating. For those who are looking for an actually playable video game, Happy Biting VR will satisfy your raunchy appetite and your gamer side. Happy Biting VR was inspired by the Mister Mosquito Indie game, available on Steam. This is the best VR game for adults who don't want to spend all of their free time watching straight-up porn. Happy Biting VR brings the player into an intricate storyline, with the full autonomy of decision-making. The only downside is that Happy Biting VR is exclusively available on Oculus Rift. The Oculus platform is great for Happy Biting VR, means that the gameplay will have all the intricate interface features, as Oculus Rift is designed to accommodate very satisfying gameplay. However, the Oculus VR gear is quite expensive.

In Happy Biting VR, players must travel back in time in order to collect DNA material to save the world from a horrible biological epidemic. It just so happens, that the source of the DNA is to be acquired from beautiful women, of whom the player must also avoid getting bitten. Players accumulate coins, used to buy outfits and the like. To date, two levels exist in the game. The first level is a bedroom and the second is a bathroom. Updates and expansions are planned through the Steam platform. Linden Lab has been a household name in the MMORPG and open world gaming industry for over 15 years. They began a revolutionary gaming movement, with the advent of Second Life, which was—and still is—one of the best adult VR world games on the market. The company has announced the release of another virtual world platform game to be launched publicly in the first half of 2017, called Sansar.

Since 2003, adults have been dabbling in their “Second Life” and it is still one of the most popular online games for adults today. One of the incredible innovations of the Second Life virtual world game platform is the open world nature of the interface. Users can travel anywhere, talk to anyone, and do virtually, anything (including all the naughty bits). In addition to decision making, users can create the world around them and open businesses which operate strictly in the Second Life world but deal in real world currency transactions. Over the years, Linden Labs has updated the software, interface, and graphics of Second Life to improve the user's experience. However, Second Life is not conducive to VR gear, as it exists.

When the game designers at Linden Labs began looking to update Second Life to accommodate the new wave of video game VR gear such as the Vive and Rift, they came to an immediate roadblock. The game design of Second Life is incredibly intricate and extensively complicated in terms of the user interface control design. It became clear, that Linden Labs would be far better off to embark on designing a brand new virtual reality world platform from scratch than attempting to update Second Life for social VR. This led to the birth of Sansar, Linden Labs public social VR experience. It is essentially a higher-quality Second Life, which one can immerse themselves in through the Oculus Rift or HTC Vive. Blue Mars is not as high-quality in its virtual reality design elements, as is that of Second Life and especially Sansar. However, if you’re looking for an open world platform, which is specifically catered towards the intimate meetings of avatars, Blue Mars is right up your alley. Based around the concept of terraforming planets, in the future, Blue Mars was developed by a Hawaii-based company called Avatar Reality and holds great potential for innovating the way in which virtual world platforms are created and used. It is definitely a VR game for adults to keep their eye on. Last, but in no way least, made specifically and exclusively for the Oculus Rift, Edge of Nowhere is the best virtual reality game for adults in 2017. Make your way through the arctic waste, with the Oculus Rift headset and gamepad and try to discern the truth from the hallucinations as you play as Victor. The game is produced using A+ industry voice talent, script and story writing, and gameplay design.